What are Rare Pepes

NFT summer started in mid 2021, and we probably won't see winter coming back ever again. Non-Fungible tokens are one of the most exciting corners or crypto, and they will probably not go away. They are offering innovation, business opportunities and tons of fun on a daily basis. Cryptopunks, Axie Infinity, Top Shots, Bored Apes Yacht Club, Beeple, Fidenza, you name it. They have generated billions in sales, and they promise to disrupt behemoths like the gaming, art or entertainment industry.

But there was a spring before that. A long season of creativity and ingenuity that built the foundations of the NFT space as we know it. It dates back to 2014, when a team of developers built Counterparty, a platform erected on top of the Bitcoin blockchain, that expanded Bitcoin's features to add the first traces of phenomena like DeFi or NFTs.

Counterparty fostered the creation of the first blockchain-based unique digital files. Spells of Genesis created the first in-game, blockchain based digital assets, for its fantasy arcade-slash-card game. After Spells of Genesis, the card game Force of Will translated their magical manga universe to the blockchain.

But not all heroes wear capes: the next best thing on Counterparty, which has eventually become the original NFT sensation, was not another fantastic universe of weird creatures and powerful spells. It was a frog.

Spinned off from 2005 comic by Matt Furie, Pepe the frog became a meme sensation. Starting off with one silly face and one sentence (“feels good, man“), Pepe was adopted as a subject for innumerable adaptations happening on 4chan, all mimicking the dank spirit of the original. 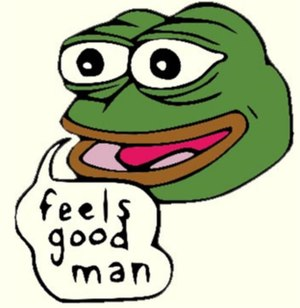 Through the magic of Telegram fueled sarcasm, Pepe became a card on Counterparty in late 2016. It started by mocking the ICO fever and honoring Satoshi Nakamoto, but went on to become a collection of pop and underground culture, political satire, and plain weirdness in general.

A group of members gathered together and created the concept of Pepe “Scientist“: they went on to become the guardians of Pepe authenticity. The Scientists put up a set of rules, aimed at avoiding too much trouble for the community and preserving the playfulness of the collection, and enforced them throughout the years.

The last accepted submission of a Pepe happened in 2018. By that time, 1774 different cards had been issued (some with 1/1 supplies, some counted in the millions) along 36 series.

You might have come across the image of Pepe as a vehicle for right wing political discourse. It was used by the American alt-right as their weapon of choice in the digital meme wars. Something the original team around the Rarepepes, and even Matt Furie, the artist behind the original character, have always rejected. The original Pepe doesn't speak about politics, unless he can speak some nonsense.

Rarepepe is still uncharted territory, even for savvy crypto natives. It's probably hard to see the forest through the FOMO for the current NFT community, blinded by non-stopping shiny new projects; but Pepes are historyof crypto. Anyone interested in taking a look at the ancestors of cats, punks, apes or penguins will inevitably land on Kek. A clunky user experience has probably prevented many from setting their eyes on this display of uncompromising inventiveness.

But that's why we're here.

Do you have a comment? A suggestion? Wanna tell us we did a kickass job? Leave us a message